By Priti Singh Raghuvanshi - February 01, 2017
With a rich culture, ancient heritage monuments and majestic temples, India is an enthralling place to explore. There are places with the perfect blend of ancient charm and deep history. One of my absolute favourite attraction is "Orchha". It is not sort of a wonderful place to visit, you can get a lot of stories fix in the walls of the palace. Orchha, which means "abandoned land" in the local language.

Fort Complex was founded in (16th century) by Bundela Chief, Rudra Pratap Singh. It is located in the Northern part of the State of Madhya Pradesh in the central region of India with few historical heritage on the bank of Betwa river. Greenery and the vibes on the way to Orchha will definitely make you feel relaxed and rejuvenated. The Betwa River flows through the town where here breaks through seven channels called the 'Satdhara', of which the origin is poetically ascribed to seven of the Orchha chiefs in honour of whose achievement they are supposed to have started flowing. It contains so many historical monuments speaking a lot of it. 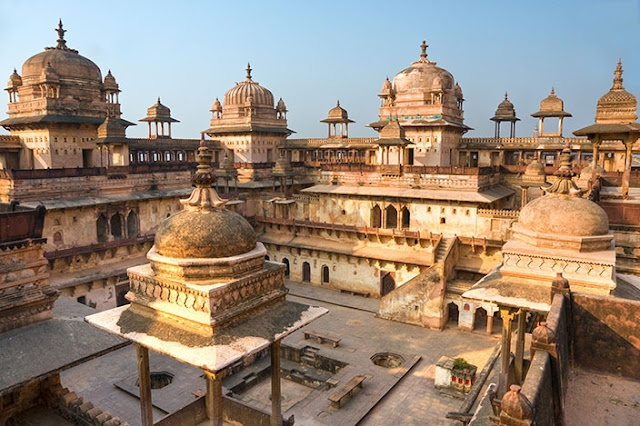 Although it is not so huge like other places,  but it is a site that offers layers of history. It was built and completed in the 17th century by king Vir Singh Deo for Prince Jahangir ( Also known as Salem). Prince Jahangir was the Eldest son of Mughal Emperor Akbar, had a difference of opinion with his weakness in the matter of the heart and especially his connection with Anarkali. Akbar sent one of the Nav Rattans of his court, Abul Fazi to kill his rebellious son Jahangir to dethrone. Vir Singh Deo helped  Jahangir in this fight and killed Abul Fazi. Prince Jahangir decided to give the Bundelkhand to Vir Singh and came in coronation function. King Vir Singh had got built this Mahal in the honour of the Prince Jahangir. 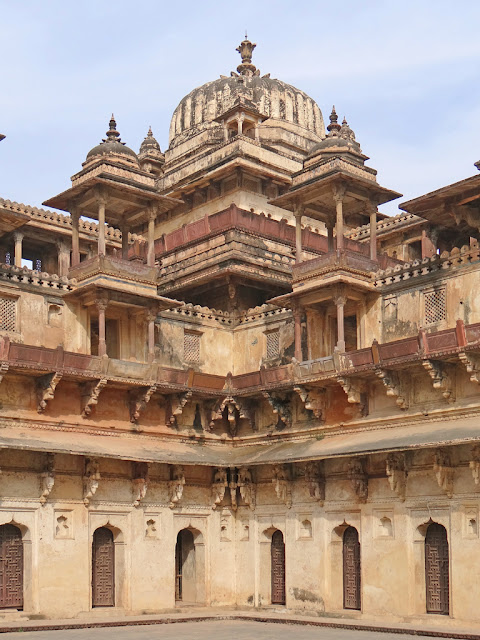 In the Indo-Islamic style and three storeyed structure that marked by styling hanging balconies, porches, and apartments. It is built mainly of red and yellow sandstone and contain 136 rooms. Covering a square of 220 feet side and rising into an immense rectangular mass supporting 8 graceful domes. The surprising fact is this that although the whole royal palace was dedicated to Jahangir and Vir Singh friendship, but when Jahangir came he stayed here for just one night.

As I already said there are a lot of stories are fixed in the wall so this temple also had a very interesting story. Vir Deo Singh's father, King Madhukar Singh was a devotee of Lord Vishnu and his mother Queen Gansh Kunwar was a devotee of Lord Ram. The Queen had a dream visitation by Lord Ram directing her to build a temple. She went to Ayodhya to obtain the holy Idol of Lord Ram to enshrine. When she came back with an Idol, the temple was under construction so, she kept the Idol in her palace. After the completion of the temple, when they tried to move that Idol, the Idol was not moved from the place. So, they constructed another temple named Raja Ram Temple.
Thus, the King instead of Lord Ram, places the Idol of Lord Vishnu, with four arms in the temple that is how the name Chaturbhuj Temple was attained. 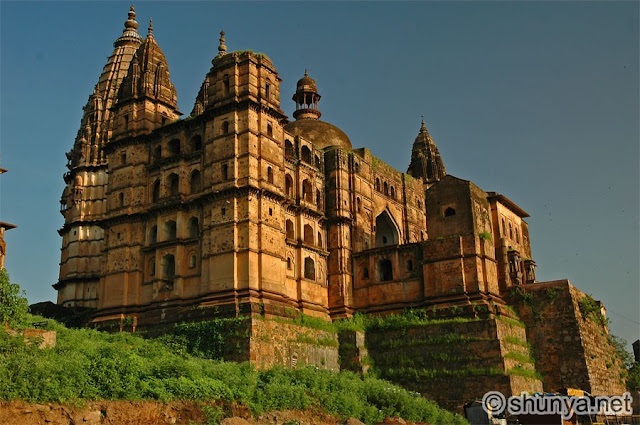 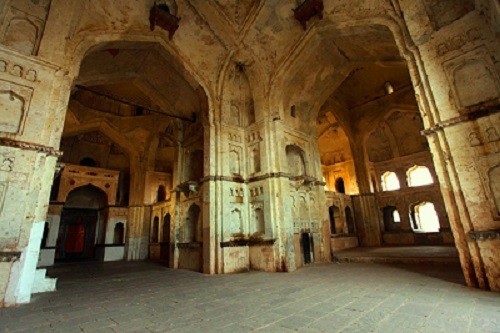 The temple is built on a square base with a plain exterior. It is a sacred Hindu pilgrimage and receives devotees in large number regularly. It is the only temple where Lord Ram is worshipped as a King and that too in the palace. 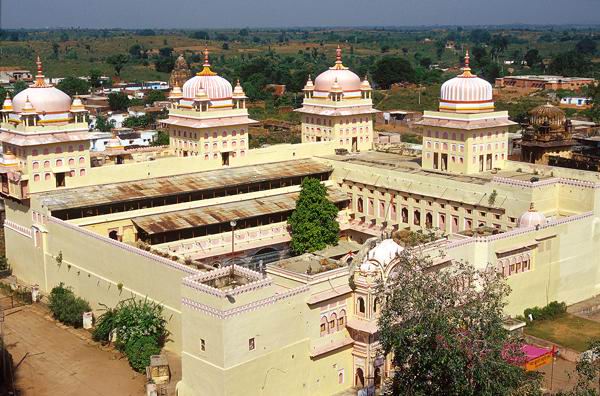 The palace was built in honour of the 'Nightingale of Orchha', Rai Parveen. This palace constructed during the year 1670 by King Inderjeet. It is a small double Storeyed brick apartment with the central hall depicting multiple paintings showing various moods of Rai Parveen. A lush garden, with shrubs and flower beds in many artistic shapes, surrounded the palace. 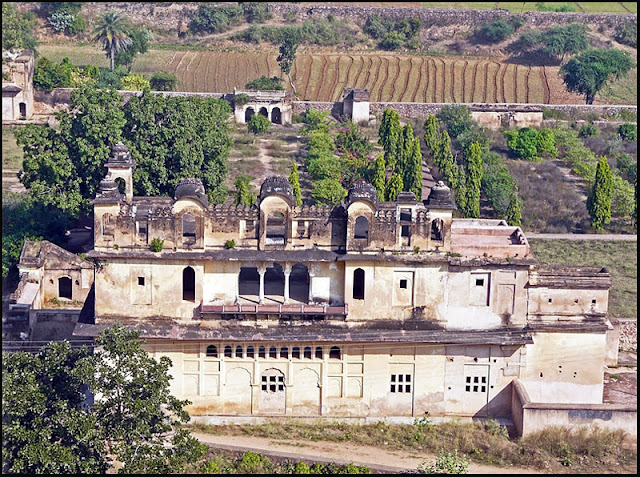 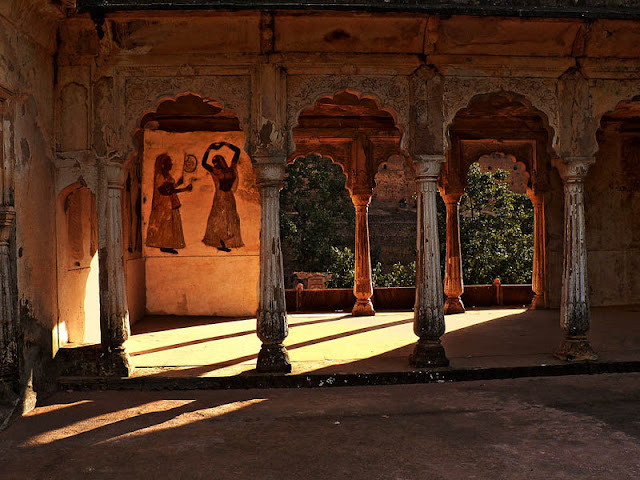 Rai Parveen was a beloved courtesan of King Inderjeet and known for her gorgeousness, beautiful poetry and melodious voice. Rai Parveen Mahal was made for her by the King Inderjeet. Emperor Akbar had got infatuated because of beauty and talent of Rai Parveen. The King Inderjeet was too weak to challenge the Mughal Emperor so he had to send her. Akbar has offered her tremendous wealth to stay in his harem, but she refused and rejected his proposal. Whoever impressed by her loyalty Akbar decided to send her back to Orchha with respect.

There are fourteen Chhatris or memorials to the Rulers of Orchha along the Kanchan Ghat of the Betwa River. They are built on the elevated square platform. Cenotaph (Chhatris) of Vir Singh Deo is the most popular of all because of its unique architecture and beautiful design. This monument still speaks of the ancients rules and their victory. 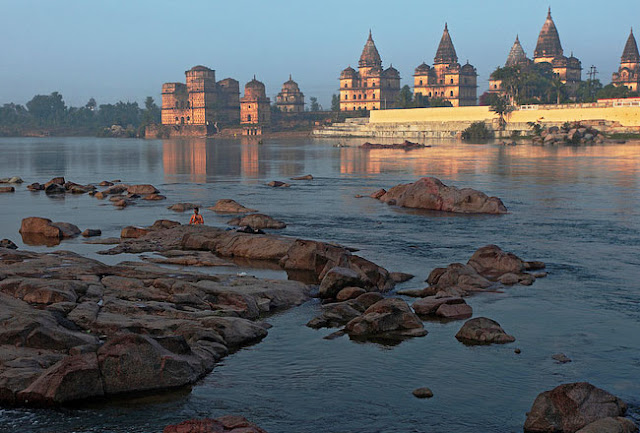 There are a lot more places to visit like, in 1800 King got it built the Sheesh Mahal, which has got converted into a heritage hotel, Laxmi Narayan temple and Wildlife Sanctuary etc. The magic words are not enough so I just described it a bit and for rest, you need to come to experience personally. An advice, consider it is a small town with so many stories hidden around every corner and book yourself on to the walking tour. 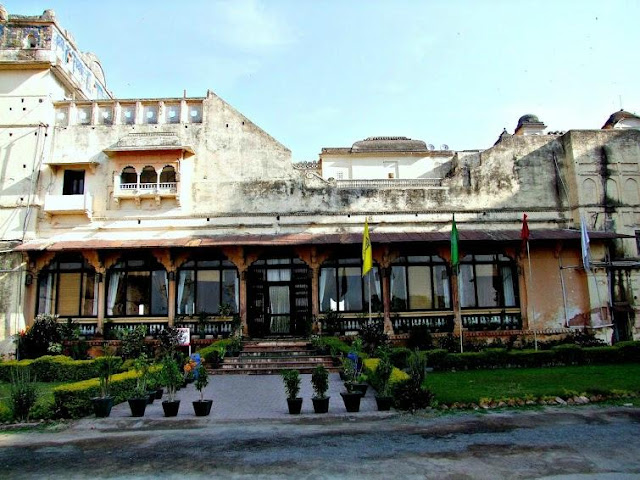 Do share if you have any experience and stories of this place.
Happy travelling.
featured Historical Royal Stories Incredible India Jahangir places Land of stories Madhya Pradesh Orchha